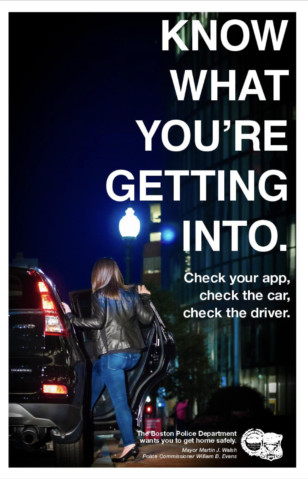 The University of South Carolina,U.S.,  is launching a national campaign called « What’s My Name » to help students stay safe when using rideshares following the killing of a student who got in a car she thought was her Uber. The University asked that every college student in America takes a pledge that says they will never get…

The University of South Carolina,U.S.,  is launching a national campaign called « What’s My Name » to help students stay safe when using rideshares following the killing of a student who got in a car she thought was her Uber. The University asked that every college student in America takes a pledge that says they will never get into a rideshare without first asking the driver, “What’s my name?” to make sure that they are getting into the right vehicle. This precaution counts not only for students but is highly recommended for all rideshare users around the globe, at any given time.

It is simple, if the driver does not say your name in return, DO NOT get into the vehicle.

Furthermore, all driver-partners should display Uber identification stickers on the rear and front windscreens in the bottom left-hand corner when using the Uber App for rideshare purposes.

These stickers must be affixed to your vehicle at all times when using the Uber App and should be removed when you’re offline.

Most rideshare services offer safety tools, such as describing the vehicle and license plate number of the service’s driver, but asking « What’s my name? » is one more extra layer of protection.

In addition to checking the license plate, the make and model of the car, and that the person in the photo matches the image on the app, Uber suggests travelers riding alone should sit in the back seat of the car in order to have an exit on either side. This also gives both you and your driver more personal space.

The company also suggests sharing trip details with a friend through a « share status » option on the app.

You’ll be able to select five contacts from your phone to include on your list of Trusted Contacts, who you can then share your trip details with by pressing on a single button.

Security upgrades allow you to dial the emergency helpline(911 for the US/ 112 for Europe) with this feature. The panic button, as it has being called, was released in April 2018 after a number of safety issues in recent years with the ride-sharing service. You must be en route in order to use it. Just look for the badge icon, click on it and it will open the so called panic button.

Another interesting fact; after a journey has been completed, the exact locations where you’ve been picked up and dropped off won’t appear in the driver’s trip log.

The rollout of these new safety features across the world is the next step in making sure thats everyone stays safe and connected, wherever they might be.

All of the features will be compiled in the Uber’s app’s ‘Safety Centre’, which can be accessed by pressing the shield icon on the bottom right half of the screen. Other ride-sharing services are planning to roll out similar safety features in the near future.

Once these checks have been completed, remember that using rideshare services is also about exercising common sense.

Thank you for your cooperation and stay safe.