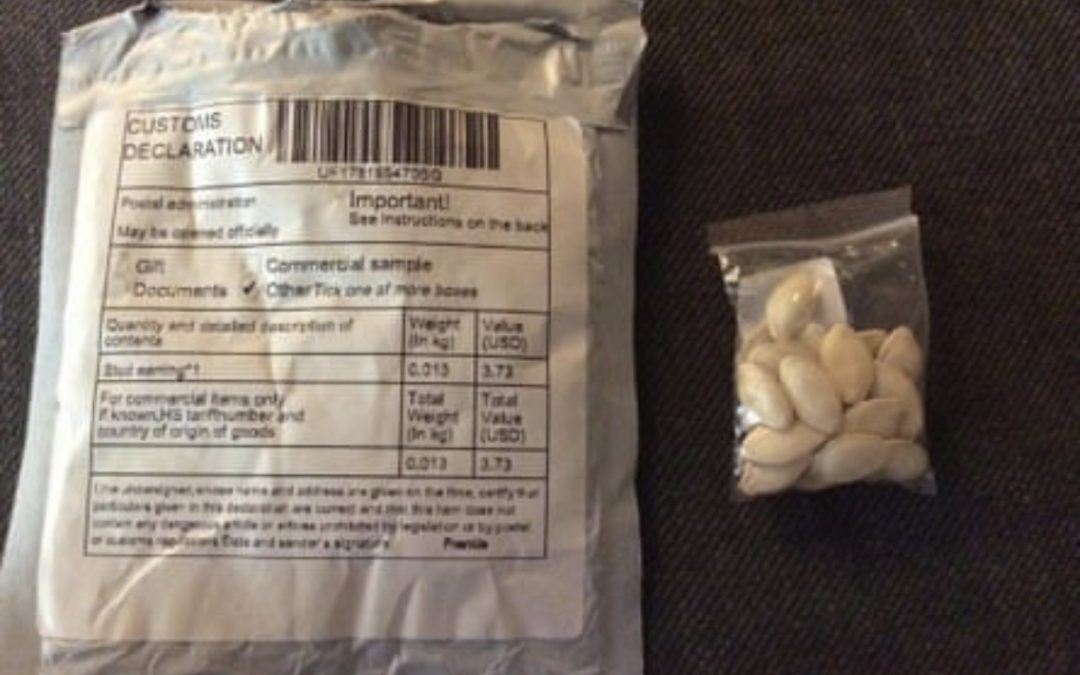 There is not much that Jan Goward does not grow in her small Eastbourne garden. “I grow everything,” she says. “I’ve got the exotics: the aubergines, the chillies …” But some mystery seeds she received in the post this week – ostensibly from Singapore, and marked as stud earrings – will not be joining them. “I haven’t got a clue what they are, so there’s no way,” says Goward firmly. “I wouldn’t ever plant something that I didn’t know the origins of.”

Goward’s mystery seeds are among potentially thousands of shipments reported this week in the US, Canada, New Zealand and Europe, including about 100 cases in the UK. The packages have sparked biosecurity concerns and international investigations into their origins, according to a recent article published in the Guardian this week.

On Tuesday, US agriculture officials issued warnings about the spate of “suspicious, unsolicited” seeds, reported in more than a dozen states, apparently sent from China.

Florida has recorded more than 630 instances, with one man claiming to have received three shipments in a week. A woman in Texas said she had received seeds in April and planted them, mistaking them for a gift – but with no results.

The US Department of Agriculture (USDA) has asked recipients not to plant the seeds as it works with Customs and Border Protection and federal agencies to uncover their source. In the UK, the Animal and Plant Health Agency (Apha) of the Department for Environment, Food and Rural Affairs is investigating reports of similar shipments across the country.

An Apha spokesperson said: “Biosecurity is of vital importance and we have robust checks in place to protect our plants and wildlife, including for online plant sales. We are currently investigating packages of seeds marked as ‘ear studs’ sent to people in the UK. Anyone who has received such seeds should not plant them and instead report them to us.”

In New Zealand, a parcel claiming to contain a “toy” arrived in Auckland from Zambia.

After Goward posted a photograph in a Facebook group for UK gardeners, she was contacted by a member who said she had received “exactly the same seeds, the same package, at the same time. And she was in Portugal.”

Goward had been intending to burn the seeds, lest they germinate in landfill. “In all honesty, the seeds look like courgette seeds,” she says. But an earlier anonymous shipment she received a couple of months ago was of “tiny little black seeds”.

Photographs shared by recipients and authorities appear to show many varieties. Some parcels have been marked with Chinese characters or “China Post” and as containing “rose stud” earrings, presumably to elude biosecurity checks or fees.

The most likely explanation, put forward by the USDA, is that the seeds are low-cost collateral in a “brushing scam”, in which people are sent items unsolicited by online sellers to generate a transaction to support fake reviews, boosting their businesses.

The Central News Agency in Taiwan reported on Wednesday that seeds apparently sent from there to Canada were in fact trans-shipped via Taiwan on behalf of a client in a third origin. The Taiwanese postal service intends to levy a $3,400 (£2,500) fine against the unidentified logistics company for sending prohibited items.

In a press conference, a spokesman for China’s foreign ministry said the address labels from China had been forged and that China Post had asked the US postal service to return packages for investigation.

The seed shipments are addressed by name, indicating a data breach of some sort.

Goward says she only buys her seeds online from one eBay retailer. “Whether [the mystery senders] got my address from somewhere, I don’t know. What is the benefit for them? Some are saying it’s a scam. That’s above me. I’ve not got a clue.”

A more nefarious theory is that the seeds are of an invasive species, such as Japanese knotweed, or an attempt to introduce pathogens or disease, or to otherwise threaten national security.

Gerard Clover, head of plant health at the Royal Horticultural Society, says it is difficult to comment without identifying the seeds’ species or origins. “Anything that has the ability to grow has the potential to be a threat.”

But he downplayed the suggestion of bioterrorism, the use of plant pests and diseases to disrupt trade and economy.

The USDA has said it “doesn’t have any evidence” to indicate this is anything other than a brushing scam. But the Kentucky state agriculture commissioner, Ryan Quarles, took another view: “We don’t have enough information to know if this is a hoax, a prank, an internet scam or an act of agricultural bioterrorism.”

Goward admits to being unsettled. “It’s a little worrying, actually. There’s a lot of people receiving these seeds – not just in England, all over the world.” She says, half-joking: “That big Triffid thing – it could be one of those, couldn’t it?”

• Members of the UK public or in Europe should report any suspicious seeds to PlantHealth.Info@apha.gov.uk. In the US, report the seed package to the USDA APHIS anti-smuggling hotline at 1-800-877-3835 or SITC.Mail@aphis.usda.gov.